Home News Soccer-Rashford, Antony score as Man United end Arsenal’s 100% start
Our website publishes news, press releases, opinion and advertorials on various financial organizations, products and services which are commissioned from various Companies, Organizations, PR agencies, Bloggers etc. These commissioned articles are commercial in nature. This is not to be considered as financial advice and should be considered only for information purposes. It does not reflect the views or opinion of our website and is not to be considered an endorsement or a recommendation. We cannot guarantee the accuracy or applicability of any information provided with respect to your individual or personal circumstances. Please seek Professional advice from a qualified professional before making any financial decisions. We link to various third-party websites, affiliate sales networks, and to our advertising partners websites. When you view or click on certain links available on our articles, our partners may compensate us for displaying the content to you or make a purchase or fill a form. This will not incur any additional charges to you. To make things simpler for you to identity or distinguish advertised or sponsored articles or links, you may consider all articles or links hosted on our site as a commercial article placement. We will not be responsible for any loss you may suffer as a result of any omission or inaccuracy on the website.
News 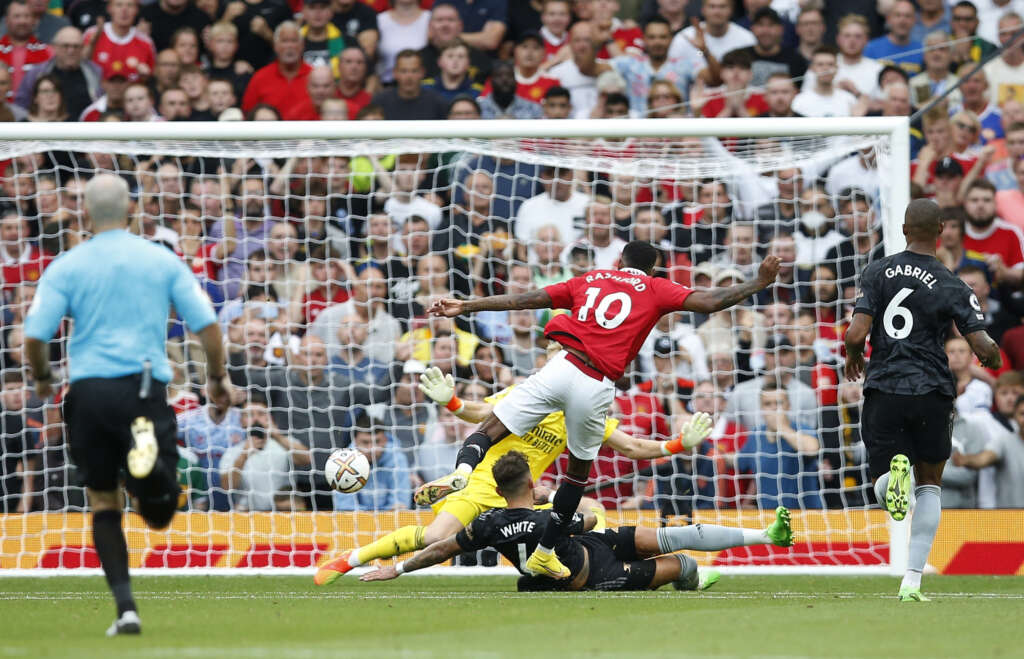 MANCHESTER, England (Reuters) -Marcus Rashford struck twice as Manchester United made it four wins in a row and ended Arsenal’s perfect start to the Premier League season with a 3-1 victory at Old Trafford on Sunday.

A high-tempo, top quality game was decided by two Rashford goals on the break after Bukayo Saka had cancelled out United debutant Antony’s opener.

Arsenal remained top of the table on 15 points thanks to their opening five wins and while they will be disappointed to have ended that run, this was far from the kind of meek loss against Big Six opponents they have produced in the recent past.

United look to have found their belief again after starting the campaign with dreadful defeats by Brighton and Brentford and Dutch coach Erik ten Hag’s approach is bringing results.

Antony was handed a place on the right flank with Rashford central and Jadon Sancho on the left but Cristiano Ronaldo started on the bench alongside Brazilian Casemiro.

United dominated the opening exchanges, camping in Arsenal’s half and there was an early chance for Christian Eriksen but the Dane’s volley flashed wide.

Arsenal looked slick on the ball, though, and Gabriel Martinelli looked to have given them a 12th-minute lead after finishing off a swift break.

But referee Paul Tierney was sent to the monitor and disallowed the goal after ruling that Eriksen had been fouled by Martin Odegaard before the counter-attack was launched.

Martinelli forced two saves from United keeper David De Gea as the visitors began to dominate but it was the home side who drew first blood, 10 minutes before the interval.

Brazilian Antony, signed from Ajax last week, was found on the right by Rashford and coolly drifted a left-foot shot into the far bottom corner.

Arsenal deservedly drew level, on the hour, when the outstanding Odegaard threaded a ball towards Gabriel Jesus in the box and after a challenge by Raphael Varane the ball fell to Saka who slotted home.

United might have panicked or faded away last season but six minutes later they restored their lead when Bruno Fernandes found Rashford with a superb through ball and the England striker confidently beat the advancing Aaron Ramsdale.

It was another swift counter that led to United’s third with the excellent Eriksen breaking clear and slipping the ball across to Rashford for a simple finish.

A four-game winning run, including victories over Liverpool and Arsenal, has totally changed the mood at Old Trafford and Ten Hag was rightly pleased with his players’ resilience.

“The spirit from this team, they can deal with setbacks so we did, it is really great and shows your mentality – we have really improved on that,” he said.

“We are happy and satisfied with the win, also the performance against a really good team – they played really well,” he said.

United climbed to fifth in the standings, three points behind Arsenal.

Gunners boss Mikel Arteta was concerned his side had not made the most of a good performance.

“I am very disappointed that we haven’t won the game. The game was there for the taking. We haven’t won it because we lacked some discipline in some moments and we weren’t ruthless enough in front of goal,” he said.

“I told the players at halftime that the game is there for the taking and if we play with more courage we win the game. It was 1-1 and then it should have been 2-1 (for us). It is a big lesson if you want to win here you have to do everything so right,” he said.