Home Technology Just 20% Of Leading Tech Entrepreneurs Are Women, According to Data
Our website publishes news, press releases, opinion and advertorials on various financial organizations, products and services which are commissioned from various Companies, Organizations, PR agencies, Bloggers etc. These commissioned articles are commercial in nature. This is not to be considered as financial advice and should be considered only for information purposes. It does not reflect the views or opinion of our website and is not to be considered an endorsement or a recommendation. We cannot guarantee the accuracy or applicability of any information provided with respect to your individual or personal circumstances. Please seek Professional advice from a qualified professional before making any financial decisions. We link to various third-party websites, affiliate sales networks, and to our advertising partners websites. When you view or click on certain links available on our articles, our partners may compensate us for displaying the content to you or make a purchase or fill a form. This will not incur any additional charges to you. To make things simpler for you to identity or distinguish advertised or sponsored articles or links, you may consider all articles or links hosted on our site as a commercial article placement. We will not be responsible for any loss you may suffer as a result of any omission or inaccuracy on the website.
Technology

Just 20% Of Leading Tech Entrepreneurs Are Women, According to Data

Using the Forbes 30 Under 30 lists from Europe, North America, Russia, Asia and Africa, the business-comparison experts at Bionic conducted research into the world’s greatest young entrepreneurs.

Bionic looked at the industry, city, country, university-education, and gender of each young entrepreneur. It was able to identify the best places to be a young entrepreneur depending on your industry and gender, and which industries and universities are best for career success.

IT and Technology was the most popular industry overall, with 20% of Forbes 30 Under 30s working in this area

Of these, 9% of young entrepreneurs worked in Enterprise Technology, while 7% worked in Consumer Technology. Young people hoping to work in this sector should also consider the below universities, as they were the most popular among successful tech entrepreneurs under 30:

Just 14% of all entrepreneurs across every industry did not possess a university education – but this figure may be even lower as some Forbes candidates did not have education data.

After leaving the EU on January 1 2021, City insiders feared Brexit would damage businesses as the trade deal included no equivalence with the bloc’s financial sector. However, new data puts the UK capital ahead of other European financial hubs. However, London was the most popular city for tech entrepreneurs – and for young entrepreneurs overall, to succeed in. Many candidates in the North America, Asia and Russia lists also lived in London.

The best countries in the world for young entrepreneurs to work across all industries were North America (41%), United Kingdom (14%), Russia (10%), India (7%) and China (2%), according to Forbes data. Meanwhile, the best cities in the world were London, New York, San Francisco, Moscow and Los Angeles. 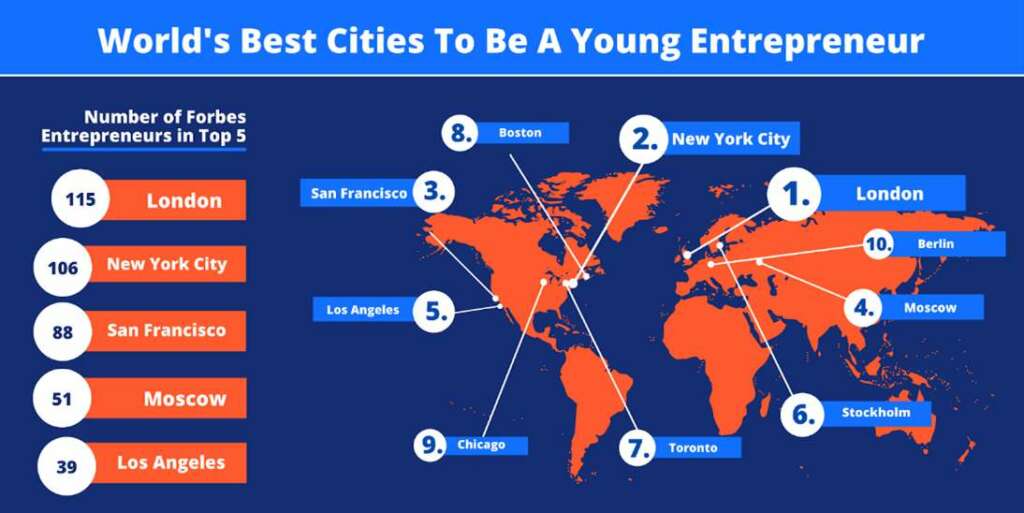 Europe was the most female-inclusive place for entrepreneurs, with 37% of the entrepreneurs studied in Europe being women. Africa and Asia tied at being the least inclusive, with just 27% being women. In Africa, the majority of candidates came from Johannesburg, South Africa. In Russia, Moscow was the most popular city. North America had the greatest decentralisation, as start-ups flourished across the continent.