Home News After rescue by Open Arms, 99 migrants wait to dock in Europe
Our website publishes news, press releases, opinion and advertorials on various financial organizations, products and services which are commissioned from various Companies, Organizations, PR agencies, Bloggers etc. These commissioned articles are commercial in nature. This is not to be considered as financial advice and should be considered only for information purposes. It does not reflect the views or opinion of our website and is not to be considered an endorsement or a recommendation. We cannot guarantee the accuracy or applicability of any information provided with respect to your individual or personal circumstances. Please seek Professional advice from a qualified professional before making any financial decisions. We link to various third-party websites, affiliate sales networks, and to our advertising partners websites. When you view or click on certain links available on our articles, our partners may compensate us for displaying the content to you or make a purchase or fill a form. This will not incur any additional charges to you. To make things simpler for you to identity or distinguish advertised or sponsored articles or links, you may consider all articles or links hosted on our site as a commercial article placement. We will not be responsible for any loss you may suffer as a result of any omission or inaccuracy on the website.
News

After rescue by Open Arms, 99 migrants wait to dock in Europe 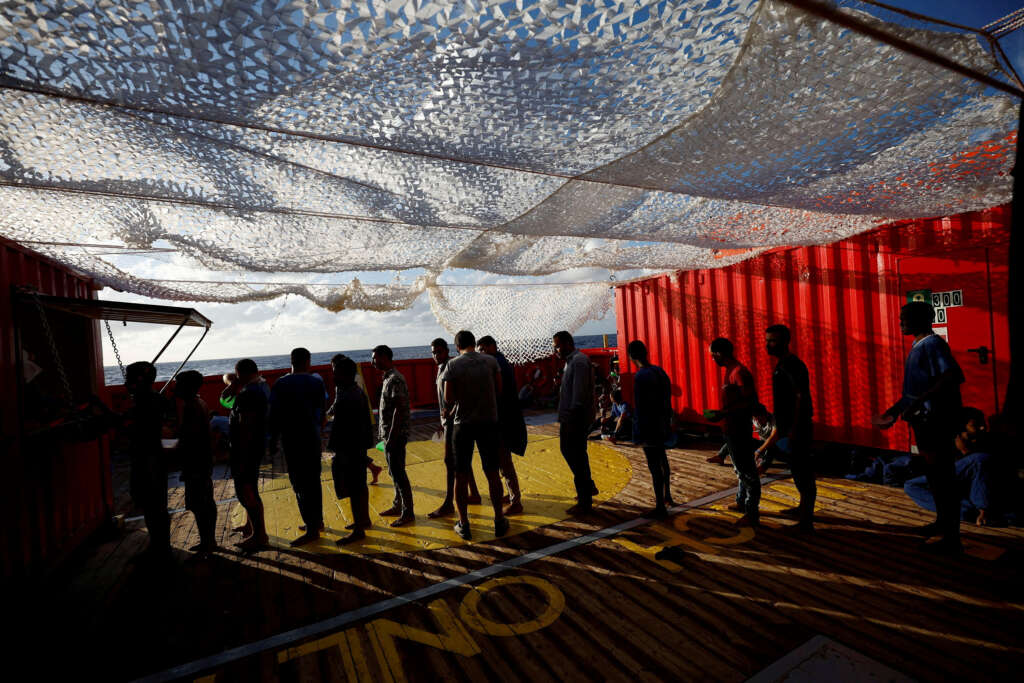 ABOARD THE OPEN ARMS UNO, off Sicily (Reuters) – Around 30 nautical miles off the coast of Italy’s Sicily, 99 migrants are awaiting an update on their future after nine days at sea as nearby nations discuss who should receive them.

Spanish charity Open Arms on Aug. 17 rescued 101 mainly Egyptian male migrants in a rickety wooden boat off the Tunisian coast that had been adrift at least since Aug. 16.

One of the men needed urgent medical attention and was allowed to disembark in Italy with his companion, but the rest of the migrants were told to remain onboard the Open Arms Uno rescue vessel while it sought permission from either Italy, Malta or Spain to disembark.

David Llado, head of mission on the Open Arms Uno, told Reuters Malta had rejected a request to dock and Italy told the Spanish-flagged ship to sort out the situation via Spanish state channels. It has since asked Spanish authorities to activate the collaboration protocol among states.

The situation on deck was “worsening by the hour”, he said. “Tension is increasing rapidly due to the uncertainty around why we are not being given a port to disembark all these people.”

“Please do something. We are hurt, weak and we are sick,” said one of the migrants, 19-year-old Rasel Miah.

The Italian government declined to comment while the Spanish transport ministry, which is in charge of ports and coast guard, said that it had not received any request from Open Arms to dock in a Spanish port.

Italian media reported that some 1,200 migrants reached Italy on Wednesday in four different boats, including one NGO boat. An official, who declined to be named, said Italy was dealing with a large number of recent arrivals and was trying to process them as quickly as it could.

No figures were available for arrivals to Spain in recent weeks. Overall migrant arrivals by boat to Spain from Jan. 1 to Aug. 15 declined 4% year-to-year, but migration to the Canaries Islands off Africa rose almost 26% as Sub-Saharan Africans fled insecurity and climate-related crises.

Open Arms, which is mainly funded by small private contributions, has rescued thousands of lives since it began operating in 2015.

Matteo Salvini, leader of Italy’s far-right League party and former interior minister, has been on trial on kidnapping charges over his decision to prevent more than 100 migrants on an Open Arms vessel from landing in the country in 2019.

Novartis to spin off generics business Sandoz next year