Home Technology The exciting future of warehouse automation in the Middle East
Our website publishes news, press releases, opinion and advertorials on various financial organizations, products and services which are commissioned from various Companies, Organizations, PR agencies, Bloggers etc. These commissioned articles are commercial in nature. This is not to be considered as financial advice and should be considered only for information purposes. It does not reflect the views or opinion of our website and is not to be considered an endorsement or a recommendation. We cannot guarantee the accuracy or applicability of any information provided with respect to your individual or personal circumstances. Please seek Professional advice from a qualified professional before making any financial decisions. We link to various third-party websites, affiliate sales networks, and to our advertising partners websites. When you view or click on certain links available on our articles, our partners may compensate us for displaying the content to you or make a purchase or fill a form. This will not incur any additional charges to you. To make things simpler for you to identity or distinguish advertised or sponsored articles or links, you may consider all articles or links hosted on our site as a commercial article placement. We will not be responsible for any loss you may suffer as a result of any omission or inaccuracy on the website.
Technology

The exciting future of warehouse automation in the Middle East 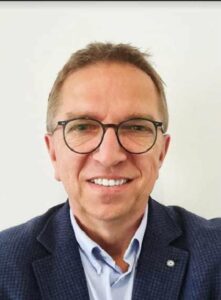 The Middle East economy’s industrial, manufacturing and logistics exports have undeniably soared in recent years. This can be largely attributed to the strategic advantages of its modern infrastructure and geographic positioning. The region has been consistent in its efforts to diversify their economy and move away from a disproportionate reliance on oil and gas exports. The development of a multitude of free zones and industrial clusters is proof. Given the growing popularity of the Middle East as a happening global hub, effectively complemented by KSA’s futuristic projects, means continued and speedy growth for the warehousing industry across the region.

There is a consistently growing stream of investments from government and private bodies in the region, ranging from ambitious giga-projects to broad-based national development programs. For instance, Saudi Arabia’s recently launched initiative to attract investments in supply chains to and from the kingdom aims to raise an initial 40 billion riyals (USD 10.64 billion). Besides, the remarkable and continued growth of the UAE can largely be attributed to the rising prominence of Dubai in world trade and its phenomenal economic outlook for the years to come. Similarly Saudi Arabia, Qatar and Bahrain have also been carrying out increased economic activity, attracting investments as well as demand.

A growing need for robotics and automation solutions

The global automated intralogistics material handling solutions market is expected to expand at 14% CAGR through 2031.

Decision makers are increasingly becoming comfortable with the idea of integrating automation technologies into their warehouses to maximise their competence. An evident increase in shipping volume over the past few years coupled with the limitations of warehouse staff in maintaining inventory accuracy and visibility has propelled this inclination toward automation with a certain sense of urgency. When tasks like picking and sortation are overly dependent on manual labour, it not only consumes an undesirable amount of time, but also stays vulnerable to the unreliable supply of manpower. Besides solving these issues, automating these processes also translates into incredible leaps in productivity, accuracy and agility.

The retail and e-commerce sectors are always looking for reliable and game-changing solutions to keep up with the ever-increasing demand for faster delivery, combined with the far-reaching impact of the global supply chain disruption. The pandemic, to a great extent, has supersized the retailers’ inclination to modernise quickly. Take the case of Saudi Arabia, where online sales have surged by about a whopping 60% on an annual basis across all categories especially for media products, clothes and footwear. The average spend per e-commerce user also increased more than 50% during the past three years, driving improvements in service quality. A growth of this scale in the GCC region is no matter of surprise, given its high spending potential, facilitated by a high per capita income, not to mention the benefits of word-class internet penetration and social media omnipresence. The thriving e-commerce industry will also generate and foster a variety of skills including managerial and tech-enabled positions with IT competencies that are equally suited for other industries such as logistics.

With the region’s sharp focus on smart cities and Industry 4.0, the Middle East is on track with their automation efforts. In fact, factory automation is one of top three trends in KSA and the UAE for 2023, the other two being smart working and smart living. This also marks a progressive and sustainable approach to employee wellbeing, as automated systems in factories would enable them to have more flexibility in working hours and workflow. Relieving human resources from mundane, repetitive tasks can also enable companies to allocate the time of their staff to more productive tasks that contribute to customer satisfaction.

There is a heightened level of interest in automation across the spectrum- those who are just at the entry point as well as those who have implemented some degree of automation so far. During the recent edition of the Seamless Fair as well, this high level of interest for warehouse automation was evident, especially for a region where it is not as widely present yet. From picking, packing and sorting to newer forms of automation such as robotic palletizing/depalletizing and Autonomous Mobile Robots (AMRs), companies are adopting automation to accelerate warehouse capabilities. Those toward the more advanced side of the spectrum have already begun preparations to actualise nearly fully automated and autonomous dark warehouses, with the help of Warehouse Execution Systems in synchronising all the different components of the big picture. Actualizing this would require a diversity of products and services including both traditional and mobile automation, supported by strong software systems- a unique combination, mostly a rare offering from a single manufacturer. Through their expansion to the Middle East, Addverb Technologies, for instance, aims to provide an end-to-end robotics and automation solutions portfolio of customizable hardware and modular software.

Given the reliance of the Middle East economy on geo-targeted processing, production and logistic facilities, warehouses are increasingly becoming more localised in order to fulfil customer demands efficiently. Localisation strategies facilitate a robust symbiotic relationship between various components of the business ecosystem to develop, sell, realise and service complete intralogistics solutions across the GCC.

Especially when it comes to e-commerce and retail, more local approaches are required to meet reduced lead times. Micro Fulfilment Centers (MFCs), which are highly automated mini distribution centres, can be used to store inventory closer to the end customer. Typically set up in a small area of around 10,000 square feet or less with efficiency to handle thousands of SKUs and deliveries per day, MFCs enable optimum space utilisation and huge cost savings to online retailers. This invariably means that implementation of automation across fulfilment centres is the smart move to make toward achieving better throughput efficiency, among numerous other advantages.

The future looks bright for automation in the Middle East

The automated materials handling equipment segment in the GCC is projected to grow at a CAGR of 8.6 percent to reach USD 498.5 million by 2023. The launch of ‘Dubai Robotics and Automation Programme’ led by Dubai Future Foundation is an excellent example of an initiative that aims to advance the contribution of the sector to 9% GDP within the next ten years, by providing 200,000 robots to increase productivity and efficiency across sectors including services, logistics and the industrial space. The initiative seeks to boost the development, testing and adoption of robotics and automation on governance, R&D support and the adoption and utilisation of emerging technologies. This aims to advance Dubai as one of the top ten cities in robotics and automation globally.

After all, in an environment of such high-paced growth, it is expected of businesses to consistently stay ahead with their operations efficiency- everything from administrative tasks and recruitment, to setting up efficient warehouses to accommodate the volume of goods to be handled on a daily basis. Automation makes the overall flow of warehouse operations  as systematic and cost-effective as possible. It’s only a matter of staying on top of the game.

Top tips on launching an app for women in tech’