Home News King Charles, in parliament, promises to follow queen’s example
Our website publishes news, press releases, opinion and advertorials on various financial organizations, products and services which are commissioned from various Companies, Organizations, PR agencies, Bloggers etc. These commissioned articles are commercial in nature. This is not to be considered as financial advice and should be considered only for information purposes. It does not reflect the views or opinion of our website and is not to be considered an endorsement or a recommendation. We cannot guarantee the accuracy or applicability of any information provided with respect to your individual or personal circumstances. Please seek Professional advice from a qualified professional before making any financial decisions. We link to various third-party websites, affiliate sales networks, and to our advertising partners websites. When you view or click on certain links available on our articles, our partners may compensate us for displaying the content to you or make a purchase or fill a form. This will not incur any additional charges to you. To make things simpler for you to identity or distinguish advertised or sponsored articles or links, you may consider all articles or links hosted on our site as a commercial article placement. We will not be responsible for any loss you may suffer as a result of any omission or inaccuracy on the website.
News 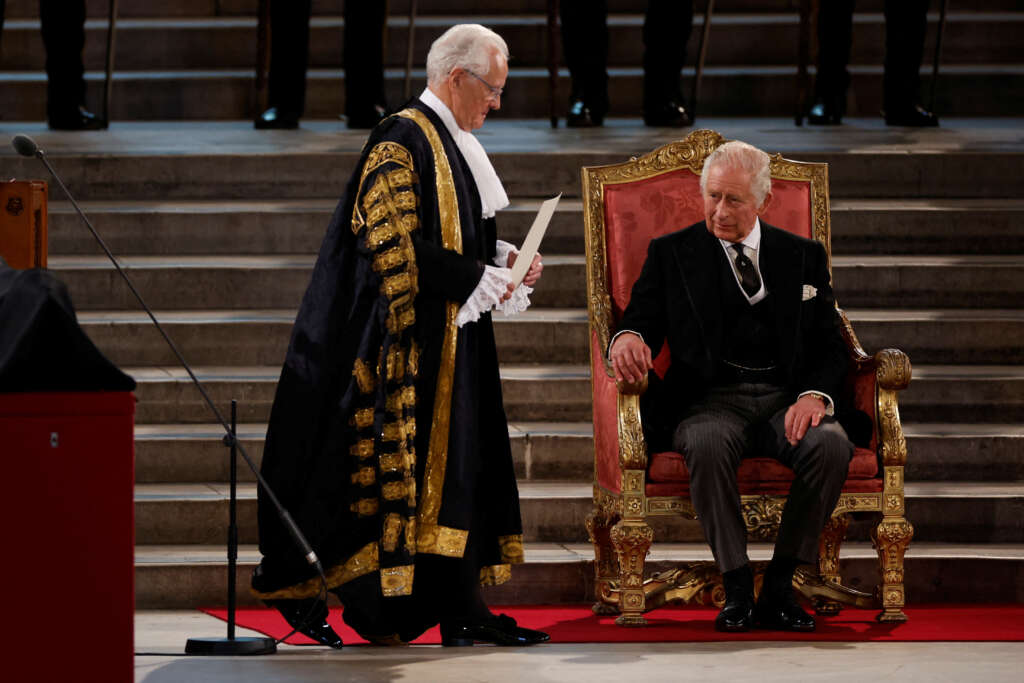 LONDON (Reuters) -King Charles told parliament on Monday he was “resolved faithfully to follow” the example set by his mother Queen Elizabeth, addressing lawmakers and peers in what he described as “the living and breathing instrument of our democracy”.

At a ceremony in Westminster Hall, the oldest building on the parliamentary estate, Charles used his address to the upper and lower houses of parliament to pay tribute to his mother and to pledge to uphold the principle of constitutional government.

“While very young, Her late Majesty pledged herself to serve her country and her people and to maintain the precious principles of constitutional government which lie at the heart of our nation. This vow she kept with unsurpassed devotion,” he told the assembled lawmakers and peers.

“She set an example of selfless duty which, with God’s help and your counsels, I am resolved faithfully to follow.”

The queen, aged 96, died at her home in Scotland on Thursday, setting in train a period of national mourning during which tens of thousands of Britons are expected to pay tribute to her. Charles, quoting William Shakespeare’s description of Elizabeth I, said “she was ‘a pattern to all Princes living’.”

The ceremony, where the speakers of the House of Lords and the House of Commons address the monarch either on their accession or at a jubilee, has taken place in the Palace of Westminster since Queen Victoria’s Diamond Jubilee in 1897.

Queen Elizabeth came to Westminster Hall on her own Diamond Jubilee, and Monday’s ceremony took place in the light of a stained glass window installed on its north wall to mark that celebration in 2012.

John McFall, Lord Speaker, told Charles the queen had been “both a leader to, and servant of, her people.”

Britain’s system of constitutional monarchy and parliamentary democracy has operated since 1688, when parliament invited William of Orange to replace King James, establishing its primacy over the crown which monarchs since have had to respect.

Charles paid tribute to parliament as “the living and breathing instrument of our democracy”.

“As I stand before you today, I cannot help but feel the weight of history which surrounds us, and which reminds us of the vital parliamentary traditions to which members of both Houses dedicate yourselves with such personal commitment for the betterment of us all.”